A shower of stars setting the sky aflame...

And in both this world and the Source, we find individuals within whom a mysterious power awakened at the sight. We could never unpick the why of it. Now I believe we might. Does the scene depicted here not resemble the one we saw when we first ventured into Qitana Ravel? Moreover, does it not resemble that which Emet-Selch invited us to witness in Amaurot?

If, as the Exarch’s research suggests, soul and mind share a fragile yet profound bond, might it not be possible for an event to leave such a deep, profound imprint upon the soul that it could be perceived eons later - given a suitable trigger?

These are my stories within the setting of FFXIV.

...yet with a single fated soul in common. 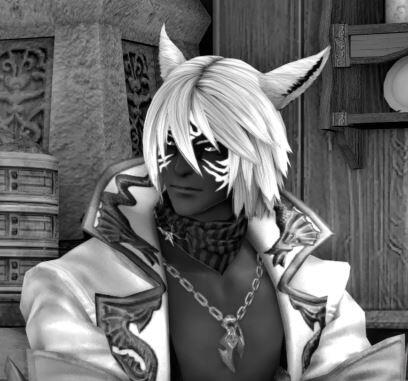 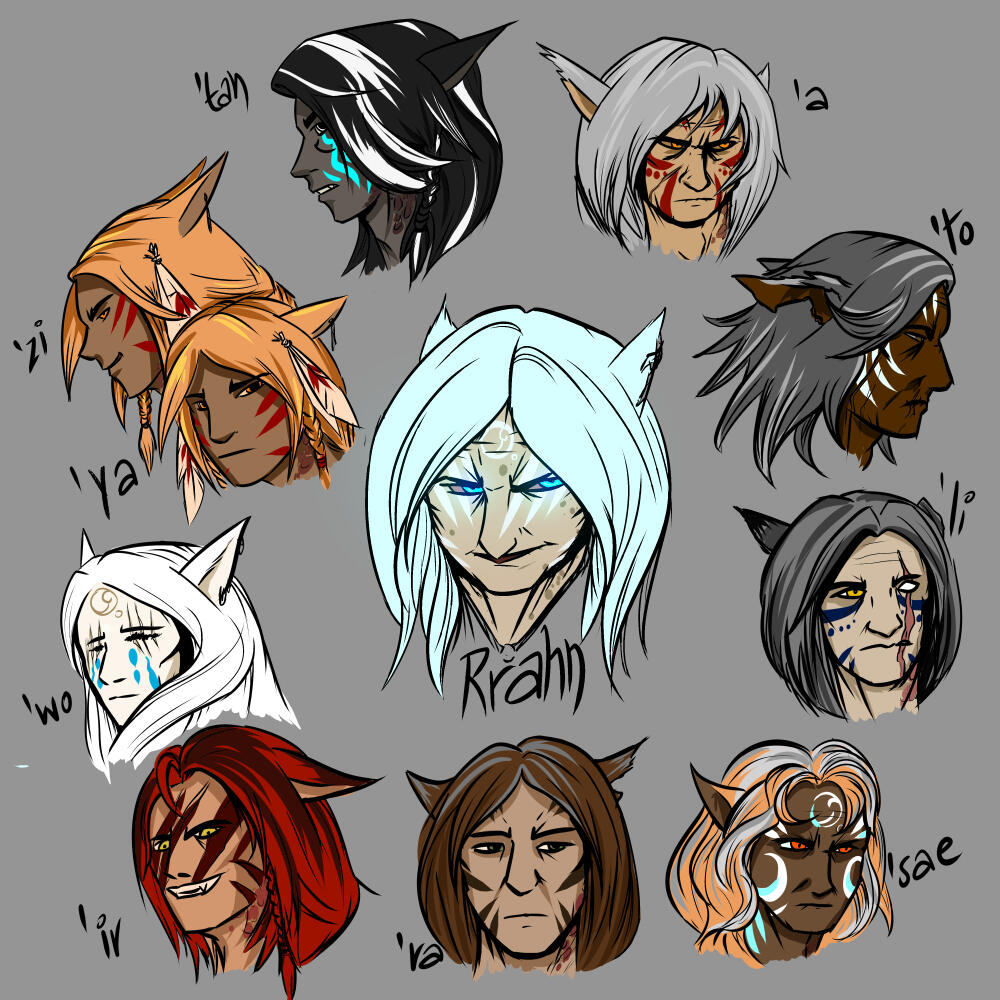 The Ten Sons of Rrahn

These are mature tales that cover several dark themes.

Never engage in content you are not comfortable with.

This assumes you've played through all of Shadowbringers;
especially for Corrupted Crystal.

It will spoil a great deal of that content if you've not played it through.

Much of this has been transcribed from Discord RP threads. As such you'll see
places where tense and sometimes timing have fallen out of sync; for example,
in Discord RP someone might react to something that happened several paragraphs earlier; or
one player uses 'says' rather than 'said'.

Editing these is a monumental, ongoing task!
This entire storyline to date easilty exceeds around 500,000+ words.
Please have patience as I work my way through and enjoy what we have!

This story uses part of the SVE canon, namely the following:

-There are multiple Warriors of Light involved in the MSQ, not just one-
-There is one who happens to be the reincarnation of Azem-
-All have their unique parts to play in this tale-

Although this tale is told through the lens of this canon,
this does not extend to roleplaying with our characters in the game.

No one has ultimate claim over being the Warrior of Light.
We will never demand that you buy into the canon outside of reading this story.

Certain things may come up that characters may be curious about - appearance changes
and the like - and we'll endeavor to explain the reasons without forcing anyone to buy into a canon they don't want to.

Obviously though, if you wish to talk to our characters in depth about the events of this tale,
there comes a point where you'll need to do so; if only for a few hours.

But we'll never force this tale on you if it doesn't work for you.

As a storyteller, I consider my first and foremost responsibility your comfort and enjoyment.

Above all, readers should feel safe.

As this tale covers some very dark topics, please read through the content warnings to see if this
tale could potentially trigger and cause you emotional and mental harm.

To avoid spoilers, some content warnings are in hidden sections. To highlight them, simply click and drag down.

Physical Abuse
Suicide
War/Battle Injuries
Torture (on and off screen)

The Ten Sons of Rrahn

What lengths will a man go to to find out his past? What terrible depths might a foe sink to in order to protect their power?

And how does this all tie into the ancient legends of the Keepers...and beyond?

The Garlean Bases
A Garlean ship crashes in the Shroud, releasing a crystal capable of draining the very land of it's aether.

Realizing it was flying to a hitherto unknown base in the Shroud, it falls now to our heroes to understand where those hidden bases are and the secrets that they hide...

Interlude - Memories of Yore
It can no longer be denied - the hand of an Ascian has made itself apparent.
Linked to these strange crystals, one can only guess at their purpose.

Amidst this all, Morgana begins to dream of a time long, long before, bringing only more questions.

Why do certain souls find their way back to each other, right now as the End of Days looms near?

The Attack on Ghimlyt Dark
Before our heroes can pursue further a sudden crisis makes itself known at the no-man's-land known as the Ghimlyt.

A rogue Legion claiming no banner chooses to attack in defiance of the treaty, and Garlemald neither aids nor interferes. Who is behind such a risky gambit and what are their true intentions?

A Summons of Ill Tiding
The Battle at the Ghimlyt

Arrangements Have Been Made
The villains have made themselves known - and yet, there is a further darkness behind them.

The attack was a ruse, meant to draw out potential Warriors of Light and find those who might
stand in their way.

With their faces now known, the shadows make to strike them down...or worse.

Mis'to is gone; kidnapped by the Garleans during the attack on the Grand Companies.

The true face behind it all is known. Pelotrus, a truly monstrous Garlean Legatus most known for
burning his own men alive to claim victory. And besides him Coeus, the Ascian Morgana has been fearing all the long...

Not saving him may cost thousands more.

The tale of the Parahel, an isolationist Keeper of the Moon clan that is not friendly with those of Eorzea.
In the last forty years they have become withdrawn even from their own kind.

Driven mad by an unknown legend, their driven, manipulative Matriarch seeks to change the Keeper world....

Prelude
Who were the Parahel, before the new Matriarch made them who they are today?

A Matriarch Passes On

A once progressive clan turned suddenly isolationist - and in doing so, a Keeper was reunited with two of his children. What made them turn that way, and why were his children sent away?
Mis'to, Morgana and Rayne set out to find what has happened to the Ithilen Clan.

Traveling to the Ithilen
The First Son
Safety
Epilogue

Chapter 2
The Longest Night
After long years of waiting, the Parahel finally make their move.
They intend to kidnap the Thar'Lor'Inah - an ancient legend from the Long Cold that has manifested itself
in a Keeper by the name of Fionn - and wipe out all the Keeper Clans that they see as a threat to their ideals

The Warriors of Light must stop them. But the Matriarch Rrahn wields a power that might be beyond any of them...

The Warriors of Light debate events...and Rayne learns an important piece of the tale...
Interlude at the Steps
The Tale of Giua
A Dirge for the Salysen

Chapter 3
The Oldest of Talekeepers

The Parahel have been pushed back, but countless lives were lost.
Mis'to fears now what has become of the deep clans - specifically, his own of the Raesthe. This ancient clan of lorekeepers claim tales back to the Long Cold - tales that could threaten the power of Rrahn.
Rayne goes with them, as she has her own demons to face...
The Trial of Rayne
The Raesthe Clan
Catching Up 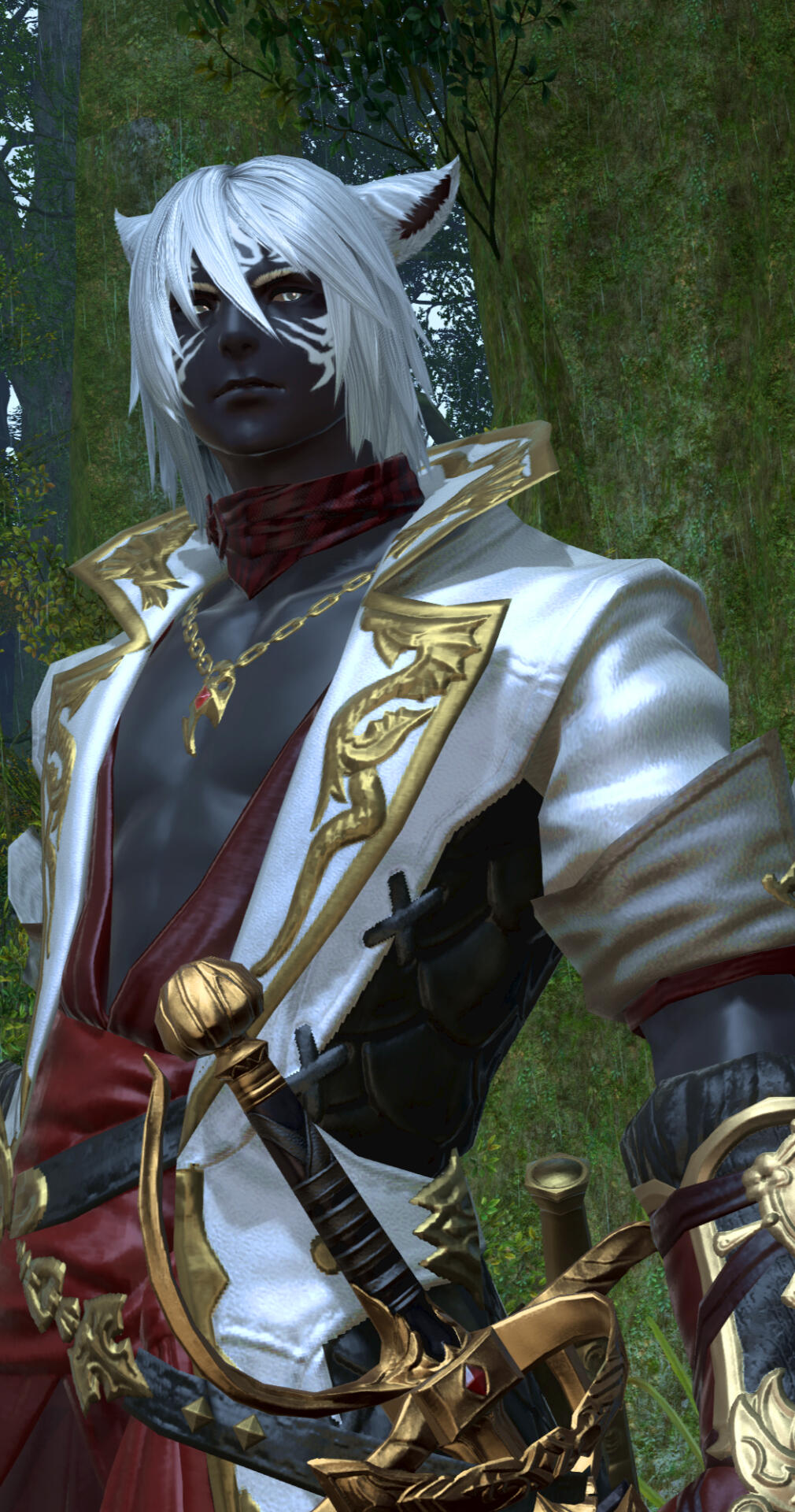 At forty-two summers, this Shroud native and retired veteran of the Adders has already seen a great deal of the world.

Genuinely easy-going and friendly, that ready smile nonetheless hides a great deal of pain - and a certain ruthlessness to those who threaten his friends.

Only daughter of a teacher and a healer, this Sharlayan girl's life was turned upside down the moment she landed in Limsa Lominsa.

A spellsword and aetherologist aged twenty-nine, this peculiar Xaela is a pensive realist with an affable attitude.

Obsessed with growing ever more powerful, she is at once inventor and practitioner of equally elaborate and destructive magics. 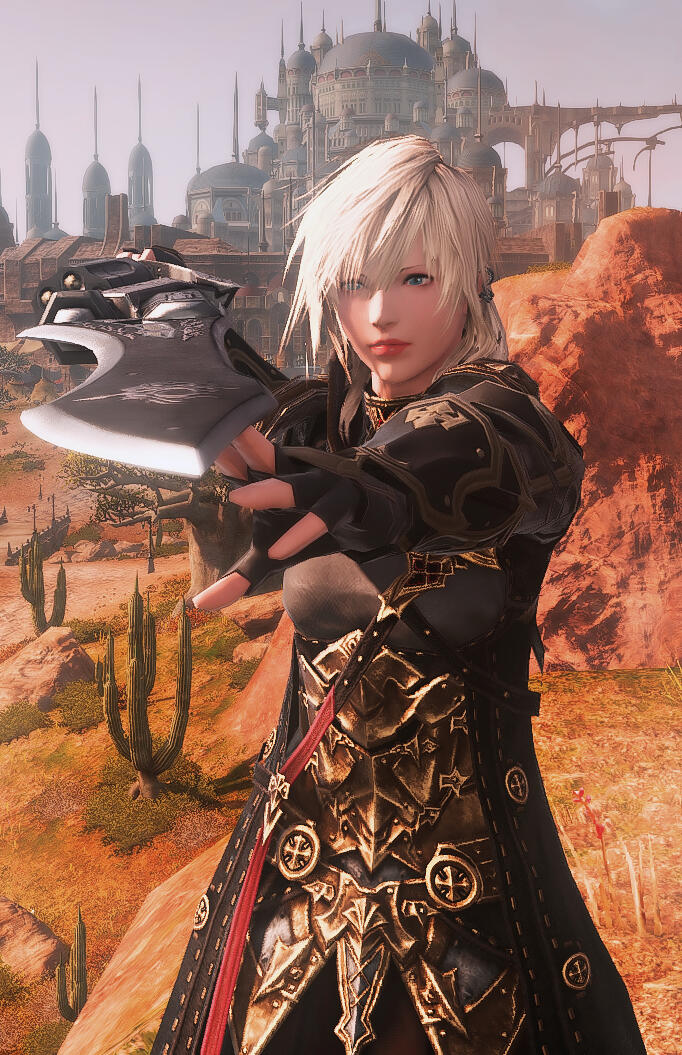 A Captain of the Immortal Flames, Seraphina is a highly skilled warrior used to putting her life on the line for her country.

Her considerable tactical acumen makes her just as formidable planning an assault as being right in the thick of it. 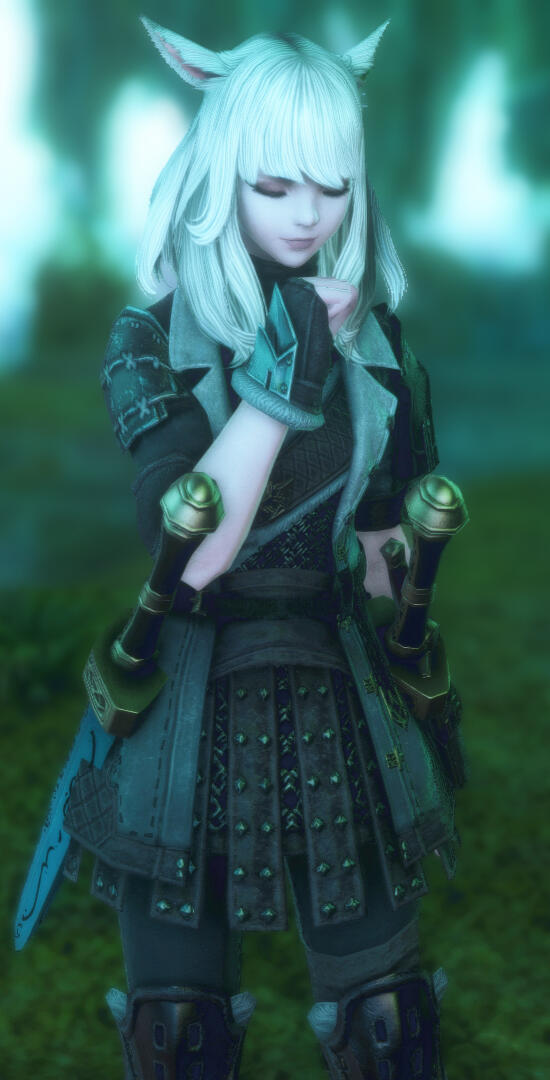 A warrior of the past, frozen in time. She recently awakened in this time, after a decisive battle with a primal in hers, and looks to find her place in a world unknown to her.

Steadfast, loyal and honest to a fault, Rina'ta struggles with her interactions towards different people, unsure of what to say and keeping her primordial powers and unusual circumstances a secret.

This young Keeper has not had an easy life amidst the clans, on top of dealing with a strange malady that aspects his own aether towards ice.

Yet his heritage is more than a mere malady, for the history of the Miqo'te is long and ancient indeed, spanning all the way to the Long Cold to where the first of the thar'lor'inah did sing.... 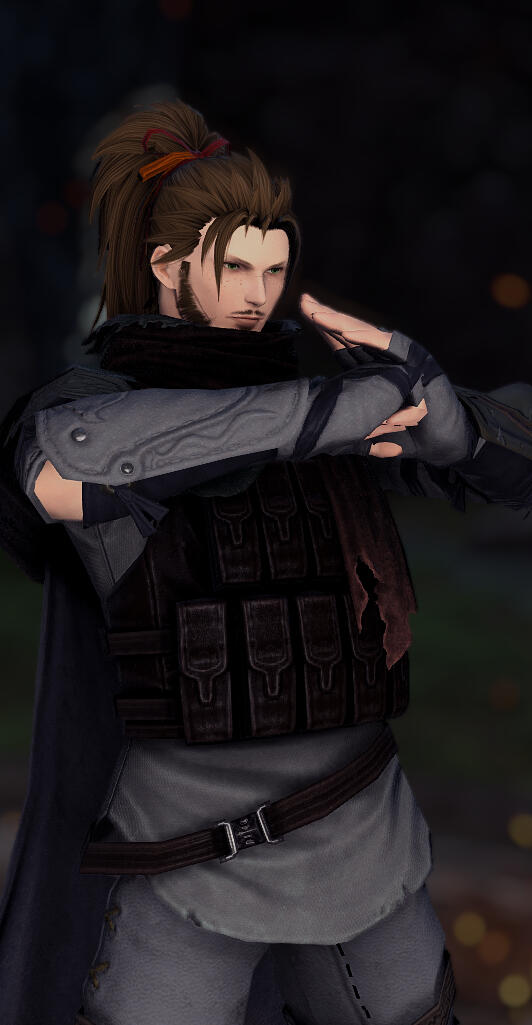 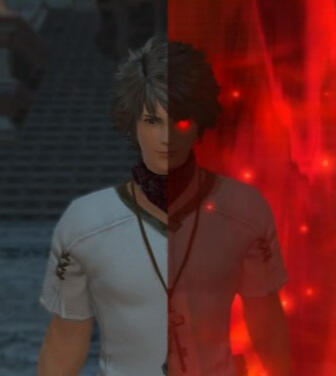 A young Miqo'te of 25 summers, this Maelstrom veteran is a gifted arcanist, used to supplementing his physical weakness with clever use of magic.

In truth, Vell is one of the few Summoners, capable of bringing powerful egi to the forefront.

Dark Knight and CEO of a mercenary business aged twenty-five, Kirigi's passion for aiding the weak belies an at times scarily ruthless warrior.

Born with a "defect" that once got her targeted by a Primal cult, she learned to use it to grant herself monstrous strength and a bag of unsettling magic tricks.

of the awesome bun